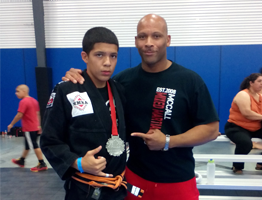 What is Mixed Martial Arts?

As the name implies, Mixed Martial Arts (MMA) is a mix of various martial arts styles; it is a blend of martial arts and grappling styles, as well as boxing and wrestling. While most people think MMA is a relatively new sport, there is evidence that a version of it was practiced amongst the ancient Greeks thousands of years ago.

Mixed Martial Arts differs from traditional martial arts in that it has a focus on both offense and defense, blending different schools of martial arts into one style. If you've ever watched UFC or MMA on television, you know those fighters don't just focus on one mode of attack. They strike and kick, grapple, use punches and jabs, and they use standard wrestling holds.

Mixed Martial Arts can be Beneficial for All Children

If you have children who are looking for an exciting after-school, weekend, or summer class to join in on, consider signing them up for MMA. Like other martial arts, MMA classes will help to teach them the discipline and focus they need to learn the various moves. That learning will move into other aspects of their lives, such as doing schoolwork and interacting with their peers. And speaking of peers, what better way to get your child meeting new people and making friends than by enrolling them in a martial arts class? They'll be having fun, and you won't worry about them being bored after school or all summer!

Mixed Martial Arts can be Beneficial for Young Adults, Too!

Whether you're heading off to college, moving to your own apartment, or starting your first grown-up job, when you're a young adult striking out on your own for the first time, it's understandable to feel a bit overwhelmed and intimidated by what you're getting yourself into. By learning MMA or other martial arts, you can channel those negative feelings into something positive, learning discipline and focus at the same time. It also allows you to gain valuable self-defense skills, which you can use to protect yourself if the need ever arises.

If you live in Houston, Humble, Kingwood, Channelview, Atascocita or the surrounding area and are looking for martial arts classes to join, consider McCall Mixed Martial Arts! McCall Mixed Martial Arts is a family owned and operated studio run by a husband and wife who are both experienced MMA practitioners themselves. The studio offers an air-conditioned waiting area, 1900 square foot training area with mats, workout equipment, and lockers. Anyone of any experience level is welcome to join; classes are available for kids, teens, and adults, from beginners up to advanced trainees, just give us a call and you can start as early as today!